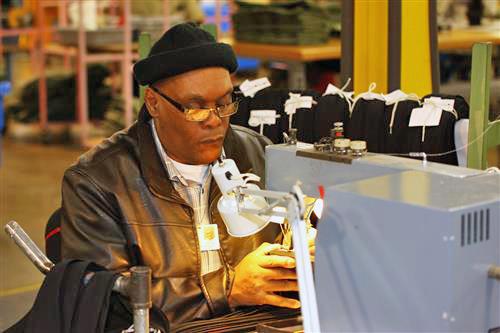 Mr. David Marshall received the 2018 Alabama Industries for the Blind’s Peter J. Salmon Direct Labor Employee of the Year Award and was honored at the annual Blind Worker of the Year Luncheon on Friday, April 6th, 2018.

National Industries for the Blind created the Peter J. Salmon Direct Labor Employee of the Year Award in 1968 to recognize outstanding performance and leadership by employees of AbilityOne agencies who are legally blind.

David Marshall is being recognized today for his contributions to Alabama Industries for the Blind and for his selection as the Peter J. Salmon Direct Labor Employee of the Year for 2018.

David was born in 1961 to Mr. and Mrs. Marshall, one of nine children, David attended public school in Eufaula, Alabama and later attended the Alabama School for the Blind where he was a member of the track team and on the wrestling team, where he won the National Championship in 1982. David graduated in 1983 and joined Alabama Industries for the Blind where he contributes to the success of all AIB departments in which he works.

David executes his duties as a production worker while making substantial contributions to the continued operation and growth of the organization, and is committed to exhibiting the highest standards of excellence, dedication, creativity and skills.

David has shown outstanding performance in his work, including paper department, and neckties.

David attends Union Springs Missionary Baptist Church, where he serves as Social Pastor, and his personal hobbies include playing the drums, singing, preaching, and reading the bible.