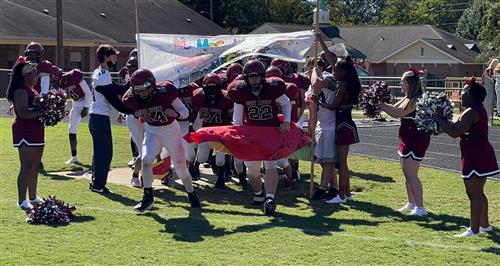 At the Alabama School for the Deaf (ASD), a champion mindset is not just an expectation. It is a way of life that has been illustrated throughout the school’s history.

In the fall of 1971, the ASD football team accomplished greatness. They had a perfect season, they progressed through the playoff games undefeated, and not only did they make it to the National Championship game, but they won it. Fifty years later, their legacy would continue as they were recognized at the 2021 Homecoming game.

ASD celebrated Homecoming on Saturday, October 16 during their matchup against the Mississippi School for the Deaf (MSD).

During halftime, Saunders also recognized the 1971 championship team in addition to the 1991 football team noting their historic achievements. In addition to the National Championship won by the 1971 team, the 1991 team had a perfect season only to be eliminated in the second round of playoffs.

The ASD Warriors defeated the MSD Bulldogs to win the 2021 Homecoming game 34 to 6.